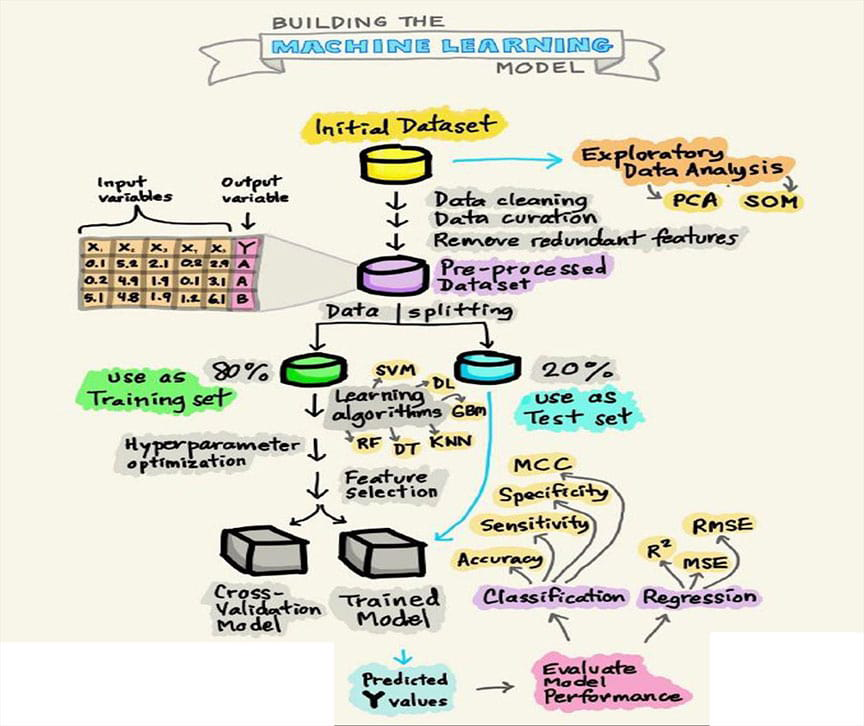 A dataset is the starting point in your journey of building the machine learning model. Simply put, the dataset is essentially an M×N matrix where M represents the columns (features) and N the rows (samples). 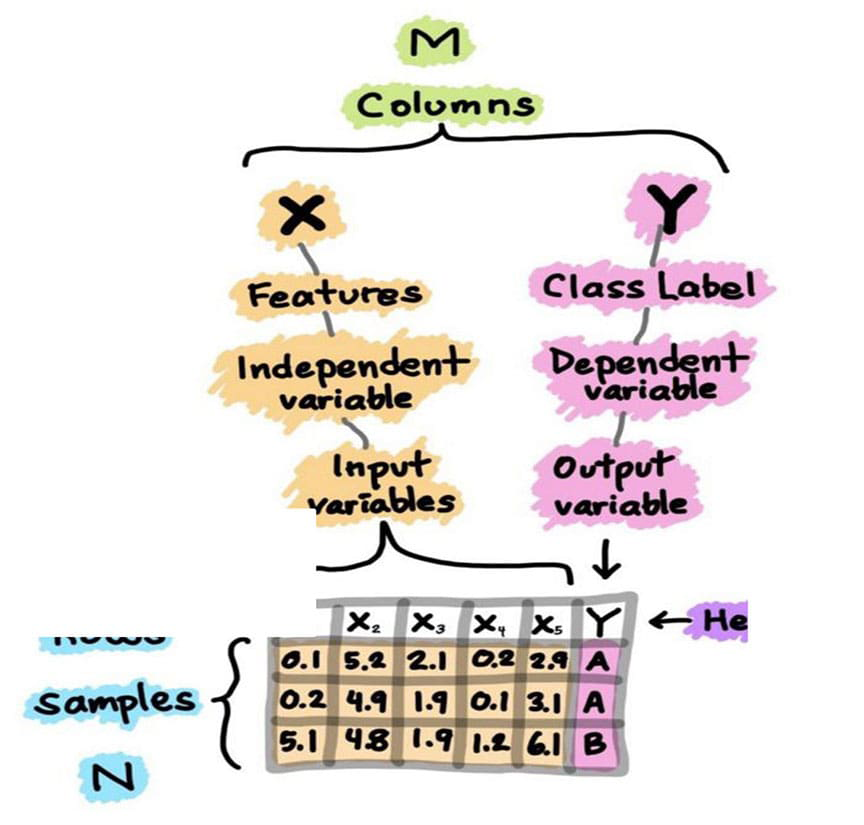 Exploratory data analysis (EDA) is performed in order to gain a preliminary understanding and allow us to get acquainted with the dataset. In a typical data science project, one of the first things that I would do is “eyeballing the data” by performing EDA so as to gain a better understanding of the data.

Three major EDA approaches that I normally use includes: 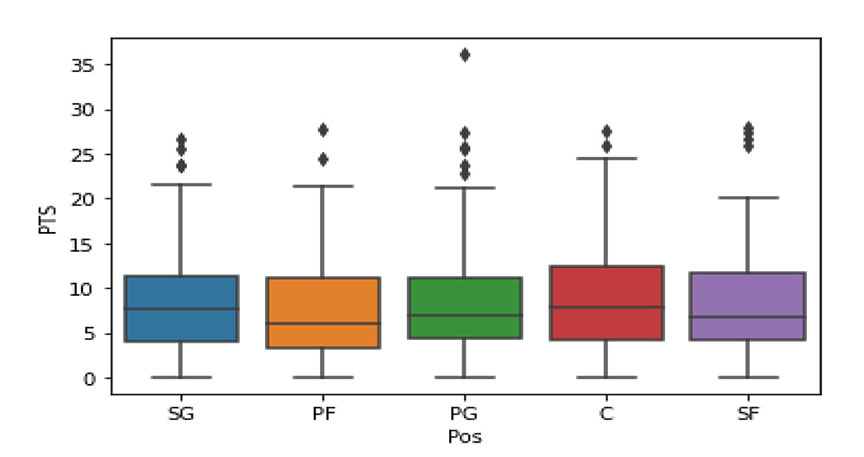 Data pre-processing (also known as data cleaning, data wrangling or data munging) is the process by which the data is subjected to various checks and scrutiny in order to remedy issues of missing values, spelling errors, normalizing/standardizing values such that they are comparable, transforming data etc.

The quality of data is going to exert a big impact on the quality of the generated model. Therefore, to achieve the highest model quality, significant effort should be spent in the data pre-processing phase. It is said that data pre-processing could easily account for 80% of the time spent on data science projects while the actual model building phase and subsequent post-model analysis account for the remaining 20%.

In the development of machine learning models, it is desirable that the trained model perform well on new, unseen data. In order to simulate the new, unseen data, the available data is subjected to data splitting whereby it is split to 2 portions (sometimes referred to as the train-test split). Particularly, the first portion is the larger data subset that is used as the training set (such as accounting for 80% of the original data) and the second is normally a smaller subset and used as the testing set (the remaining 20% of the data). It should be noted that such data split is performed once.

Next, the training set is used to build a predictive model and such trained model is then applied on the testing set (i.e. serving as the new, unseen data) to make predictions. Selection of the best model is made on the basis of the model’s performance on the testing set and in efforts to obtain the best possible model, hyperparameter optimization may also be performed. 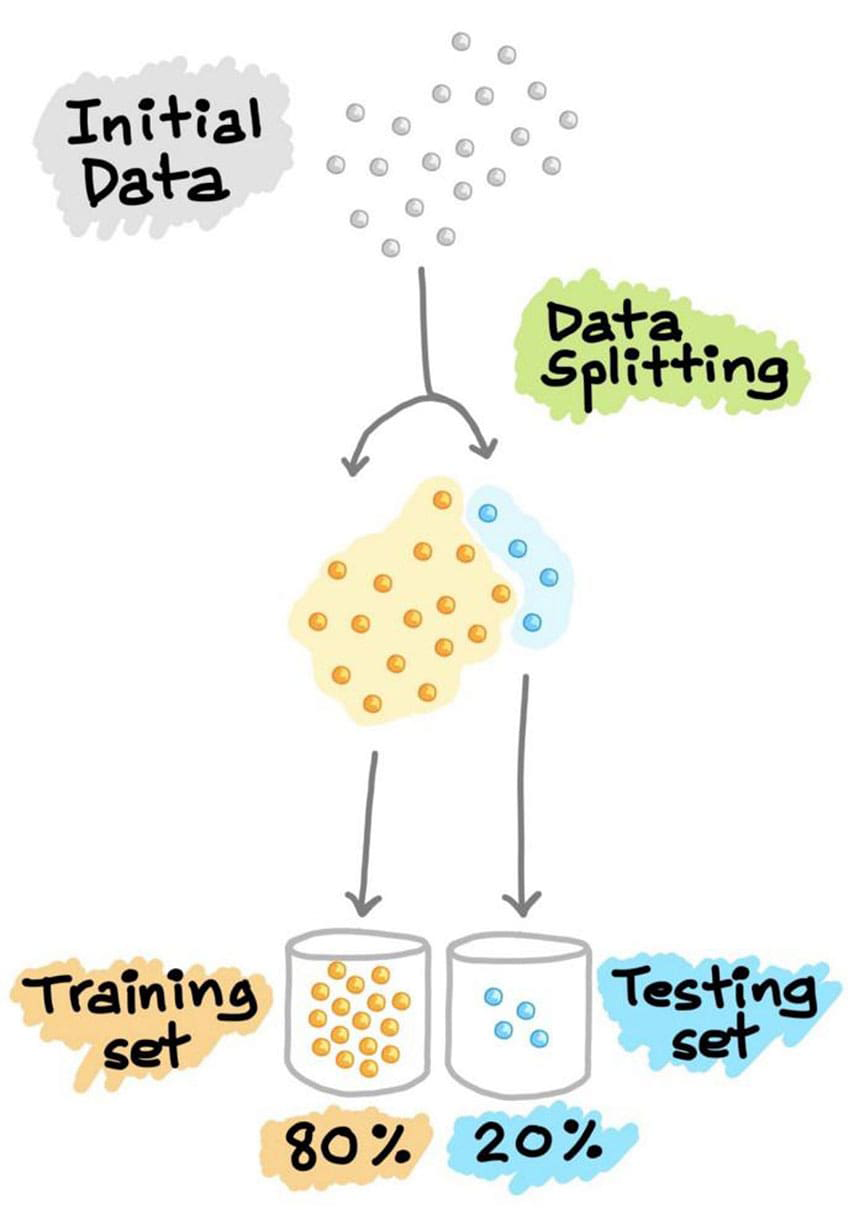 Another common approach for data splitting is to split the data to 3 portions: (1) training set, (2) validation set and (3) testing set. Similar to what was explained above, the training set is used to build a predictive model and is also evaluated on the validation set whereby predictions are made, model tuning can be made (e.g. hyperparameter optimization) and selection of the best performing model based on results of the validation set. As we can see, similar to what was performed above to the test set, here we do the same procedure on the validation set instead. Notice that the testing set is not involved in any of the model building and preparation. Thus, the testing set can truly act as the new, unseen data. 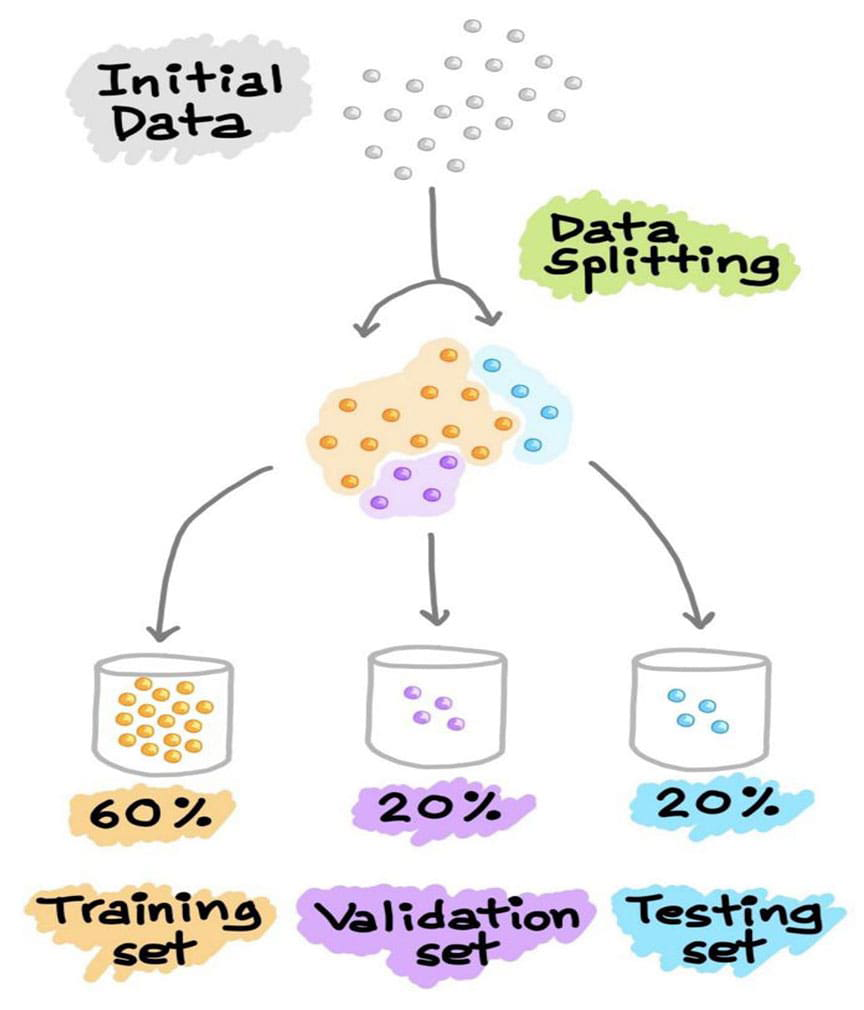 In order to make the most economical use of the available data, an N-fold cross-validation (CV) is normally used whereby the dataset is partitioned to N folds (i.e. commonly 5-fold or 10-fold CV are used). In such N-fold CV, one of the fold is left out as the testing data while the remaining folds are used as the training data for model building.

For example, in a 5-fold CV, 1 fold is left out and used as the testing data while the remaining 4 folds are pooled together and used as the training data for model building. The trained model is then applied on the aforementioned left-out fold (i.e. the test data). This process is carried out iteratively until all folds had a chance to be left out as the testing data. As a result, we will have built 5 models (i.e. where each of the 5 folds have been left out as the testing set) where each of the 5 models contain associated performance metrics (which we will discuss soon in the forthcoming section). Finally, the metric values are based on the average performance computed from the 5 models. 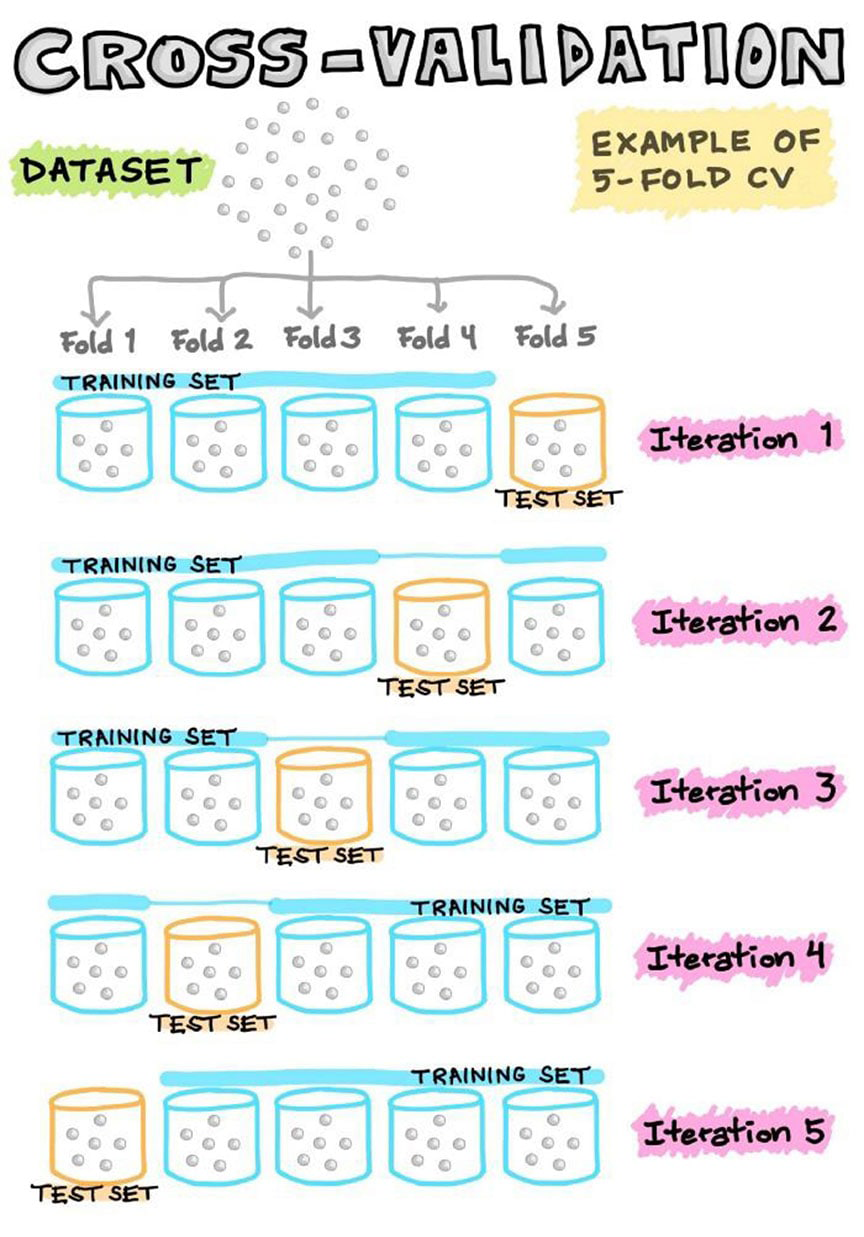 In situations when N is equal to the number of data samples, we call this leave-one-out cross-validation. In this type of CV, each data sample represents a fold. For example, if N is equal to 30 then there are 30 folds (1 sample per fold). As in any other N-fold CV, 1 fold is left out as the testing set while the remaining 29 folds are used to build the model. Next, the built model is applied to make prediction on the leftout fold. As before, this process is performed iteratively for a total of 30 times; and the average performance from the 30 models are computed and used as the CV performance metric.

Now, comes the fun part where we finally get to use the meticulously prepared data for model building. Depending on the data type (qualitative or quantitative) of the target variable (commonly referred to as the Y variable) we are either going to be building a classification (if Y is qualitative) or regression (if Y is quantitative) model.

Machine learning algorithms could be broadly categorised to one of three types:

Hyperparameters are essentially parameters of the machine learning algorithm that directly impacts the learning process and prediction performance. As there are no “one-size fits all” hyperparameter settings that will universally work for all datasets therefore one will need to perform hyperparameter optimization (also known as hyperparameter tuning or model tuning).

Let’s take random forest as an example. Two common hyperparameters that are typically subjected to optimization when using the randomForest R package includes the mtry and ntree parameters (this corresponds to n_estimators and max_features in RandomForestClassifier() and Rando mForestRegressor() functions from the scikit-learn Python library). mtry (max_features) represents the number of variables that are randomly sampled as candidates at each split while ntree (n_estimators) represents the number of trees to grow.

As the name implies, feature selection is literally the process of selecting a subset of features from an initially large volume of features. Aside from achieving highly accurate models, one of the most important aspect of machine learning model building is to obtain actionable insights and in order to achieve that it is important to be able to select a subset of important features from the vast number.

The task of feature selection in itself can constitute an entirely new area of research where intense efforts are geared toward devising novel algorithms and approaches. From amongst the plethora of available feature selection algorithms, some of the classical methods are based on simulated annealing and genetic algorithm.

A trained classification model takes as input a set of variables (either quantitative or qualitative) and predicts the output class label (qualitative). The following figure hows three classes as indicated by the different colors and labels. Each small colored spheres represent a data sample whereby each sample 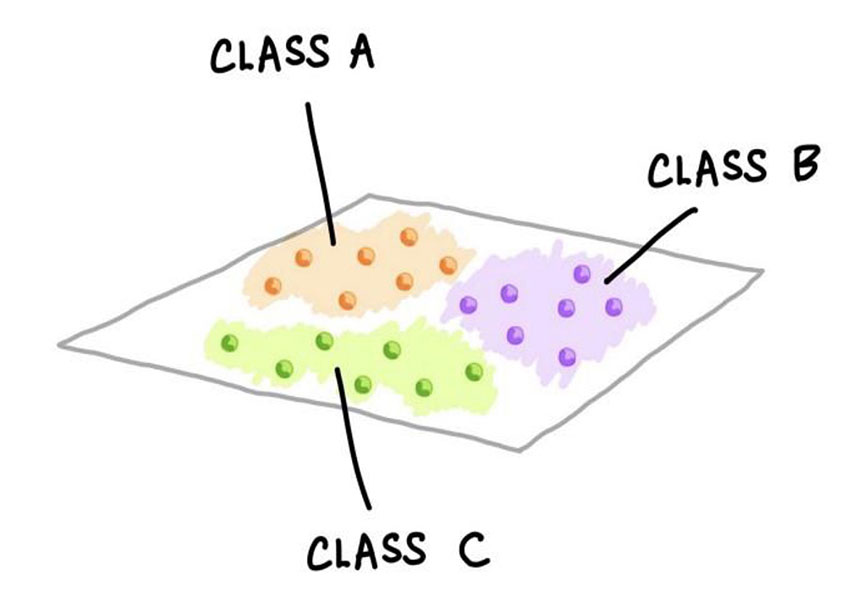 Take for example, the Penguins dataset (recently proposed as a replacement dataset for the heavily used Iris dataset) where we take as input quantitative (bill length, bill depth, flipper length and body mass)and qualitative (sex and island) features that uniquely describes the characteristics of penguins and classifying it as belonging to one of three species class label (Adelie, Chinstrap or Gentoo). The dataset is comprised of 344 rows and 8 columns. A prior analysis revealed that the dataset contains 333 complete cases where 19 missing values were presented in the 11 incomplete cases. 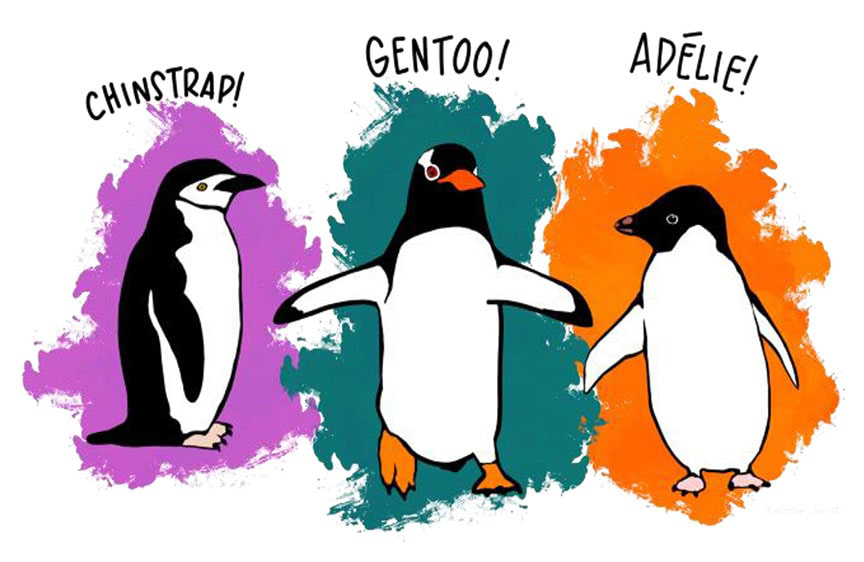 How do we know when our model performs good or bad? The answer is to use performance metrics and some of the common ones for assessing the classification performance includes accuracy (Ac), sensitivity (Sn), specificity (Sp) and the Matthew’s correlation coefficient (MCC). 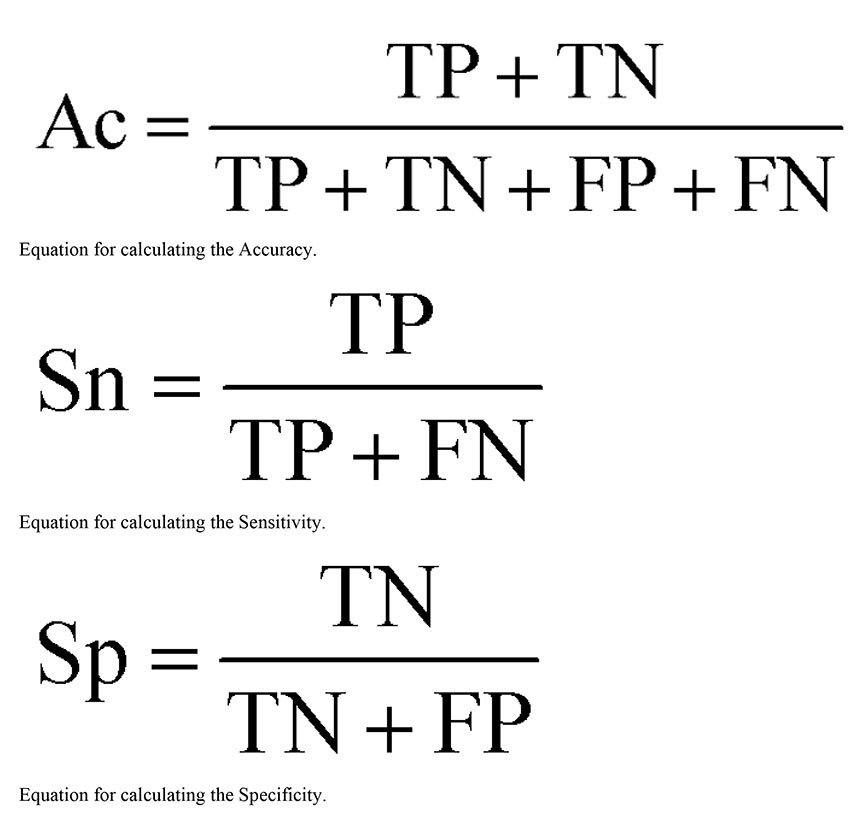 In a nutshell, a trained regression model can be best summarised by the following simple equation:

where Y corresponds to the quantitative output variable, X refers to the input variables and f refers to the mapping function (obtained from the trained model) for computing the output values as a function of input features. The essence of the above equation for the regression example is that Y can be deduced if X is known. Once Y is calculated (we can also say ‘predicted’), a popular way to visualise the results is to make a simple scatter plot of the actual values versus the predicted values as shown below. 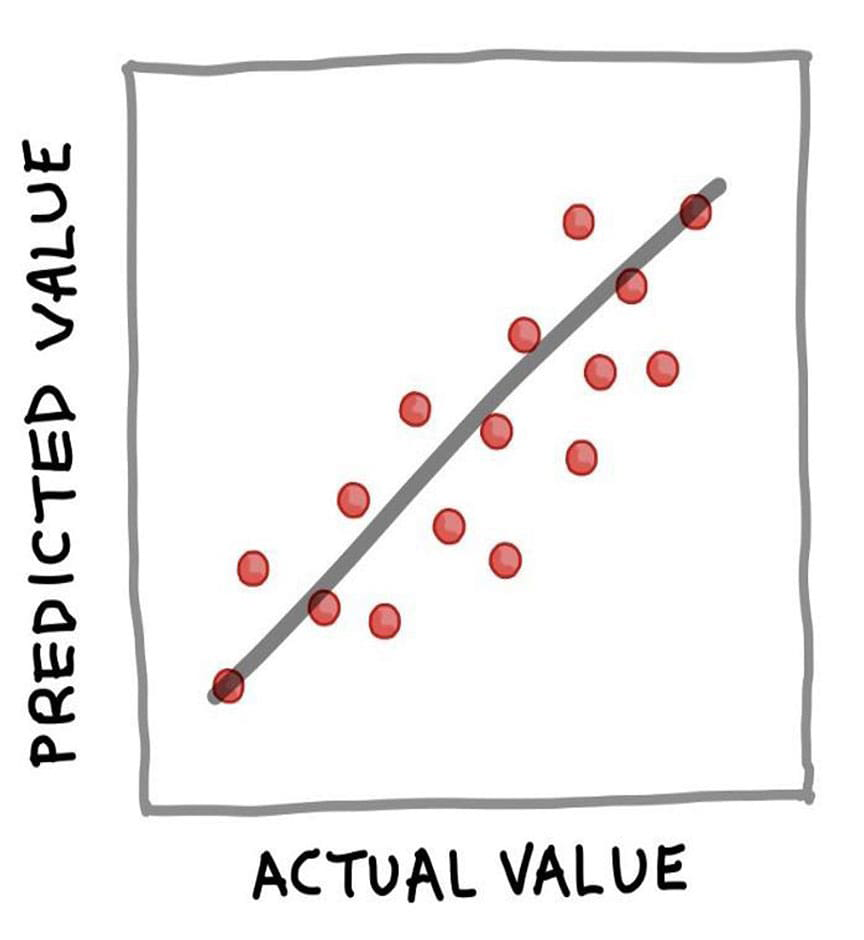 Evaluation of the performance of regression models are performed to assess the degree at which a fitted model can accurately predict the values of input data.

Common metric for evaluating the performance of regression models is the coefficient of determination (R²). 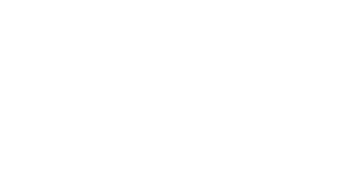 As can be seen from the equation, R² is essentially 1 minus the ratio of the residual sum of squares to that of the total sum of squares. In simple terms, it can be said to represent the relative measure of explained variance. For example if R² = 0.6 then it means that the model could explain 60% of the variance (i.e. that is 60% of the data fits the regression model) whereas the unexplained variance accounted for the remaining 40%.

As can be seen from the above equation, the MSE is as the name implies easily computed by taking the mean of the squared error. Furthermore, a simple square root of the MSE yields the RMSE.

A Visual Explanation of the Classification Process

Now let’s take another look at the entire process of a classification model. Using the Penguins dataset as an example, we can see that penguins can be characterised by 4 quantitative features and 2 qualitative features, which are then used as input for training a classification model. In training the model, some of the issues that one would need to consider includes the following:

Once the model has been trained, the resulting model can be used to make predictions on the class label (i.e. in our case the penguins species), which can be one of three penguins species: Adelie, Chinstrap or Gentoo.

Aside from performing only classification modeling, one could also perform principal component analysis (PCA), which will make use of only the X (independent) variables to discern the underlying structure of the data and in doing so would allow the visualisation of the inherent data clusters (shown below as a hypothetical plot where the clusters are color-coded according to the 3 penguins species). 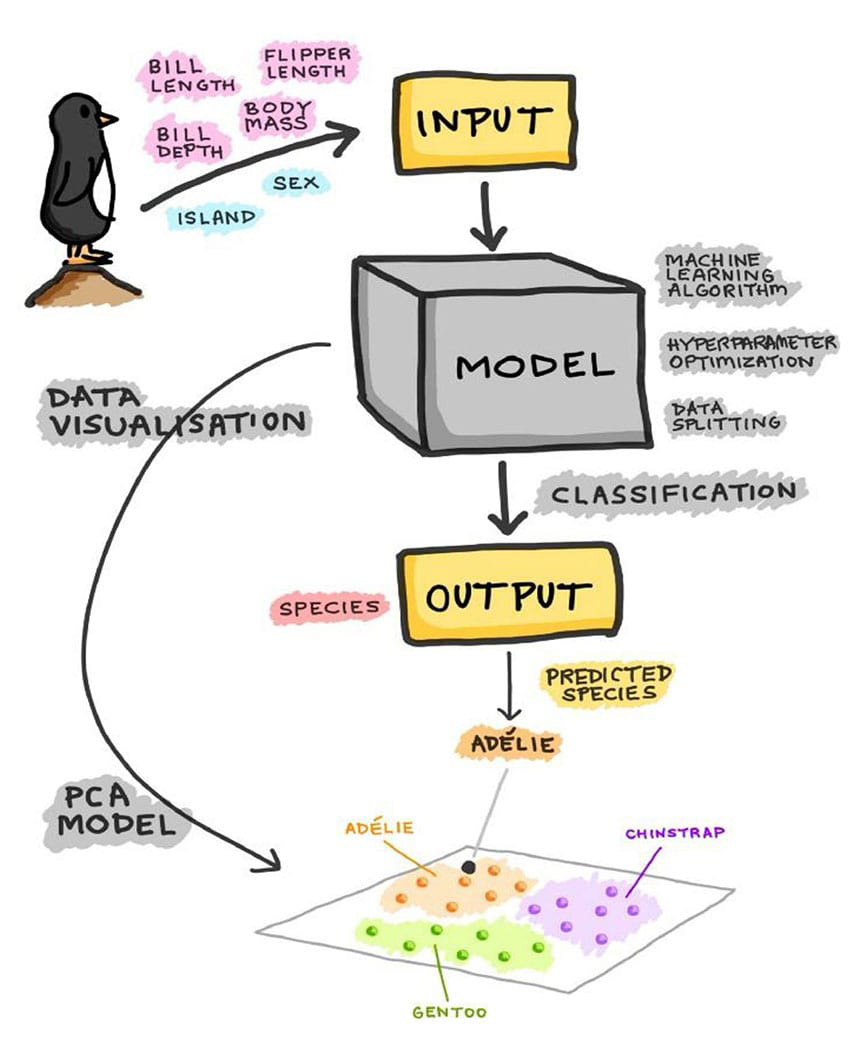 Hope This Article Gives you a Start to Begin the Machine Learning Journey...